Overview of Protected Areas datasets, concern levels, categories, and why PAD data is different than some public basemaps

Overview of Protected Areas in Transect

View PAD data by navigating to and clicking on Protected Areas in the lefthand navigation bar of the Transect Report.

The Importance of the PAD Category Column

Not all lands in the PAD are "owned" by a public agency. The Category column in the Transect PAD data table provides categories that define various kinds of public land interest in a property. For example, fee lands are outright owned by a public agency and are likely subject to additional permitting, which are shown in the Permits & Pathways section of the Transect Report.  However, a project within an Approved, Proclamation or Extent Boundary is an area on an agency's radar, but not owned by an agency, and therefore typically does not require any additional permitting.

The screenshot below will help you find the Category column in your report.

Why is the PAD data in Transect different than some public basemaps?

An example of the Administrative Boundary verses the PAD surface ownership at Davy Crockett National Forest, managed by the US Forest Service, is provided below. 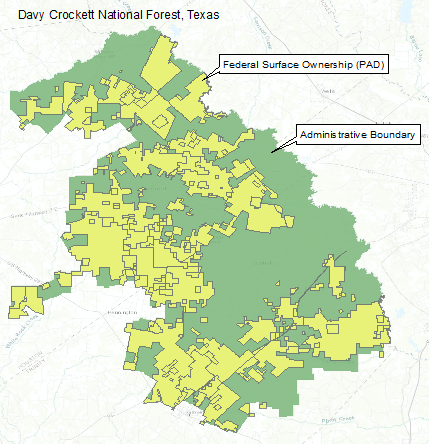